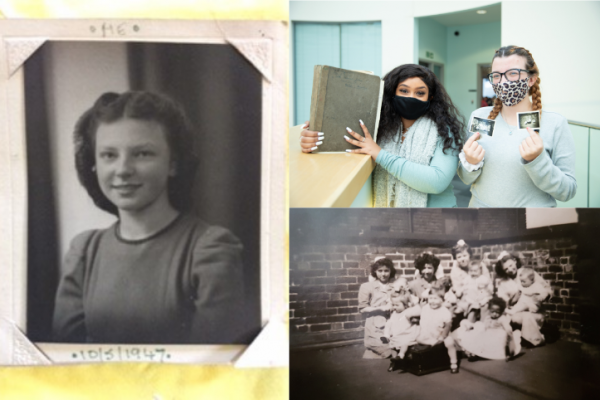 When Dorothy Chapman began studying at Bolton Technical College in 1946, little did she know that over 75 years later, Bolton College’s childcare students would be taking inspiration from her work.

Tutors and students from Bolton College’s Childcare & Education department were left speechless when they received Dorothy’s old notebook in the post, following her passing at the age of 87.

Following her death last year, Dorothy’s daughters Gina and Isla discovered the book whilst clearing out Dorothy’s possessions, and they kindly decided to donate it to the College, which is part of the University of Bolton Group.

Dorothy, whose maiden name was Kay, left Bolton in the 1950s but she always looked back on her time in the town fondly, particularly the period she spent studying nursery nursing at the now-demolished Technical College on Manchester Road.

Once qualified Dorothy, who grew up in Tonge Moor, went on to work at various municipal creches across the borough, before moving to London after marrying her first husband, Derek.

After her move to the capital, Dorothy continued to invoke the skills she had learnt in Bolton, working in various childcare roles.

Included in the book are case studies of the children in her care, as well as photos of fellow students and the youngsters that she looked after at Newport Street Nursery.

The book is a time capsule of life in post-War Britain, with pages devoted to popular children’s stories of the time, as well as recipes for luncheon tarts, treacle toffee, lemon cheese and parkin.

Dorothy’s writing also gives an often amusing insight into the culture of the 1940s, and how times have changed. In one excerpt, Dorothy stresses the perils of wearing too much make-up, warning: “Make-up should be used to accentuate the natural features, not used so that it gives an artificial look”.

For healthy hair, she also advises: “Hair should be given at least the hundred proverbial strokes a day to help to keep it healthy and glossy.”

Jennifer Coke, Curriculum Leader for Childcare & Education at Bolton College, said: “We are so privileged to receive Dorothy’s notebook and would like to thank Dorothy’s daughters, Gina and Isla, for gifting it to us – it is wonderful and we will treasure it.

“Our Childcare students were fascinated with the book and so interested in finding out about a previous student who learnt her profession so long ago.

“Surprisingly, some of the ways in which we teach childcare haven’t changed that much; some parts of what Dorothy wrote about are reflected in our current curriculum which just goes to show, children will always be children!”

Gina Page, Dorothy’s daughter, added: “My sister Isla and I could not be more pleased that Mum’s course notes from her childcare studies at Bolton Technical College have found a permanent home at Bolton College, where they will be valuable archive source material for future generations of childcare students.”